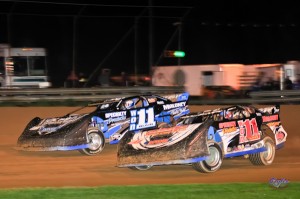 Our photos from October 2 at Mercer Raceway Park have been added to our gallery.

Like an old broken record in 2010, after sunny, dry start to the day on Saturday, the clouds and showers rolled in during the evening; and though they persisted on and off all night long, the majority of the season ending “Fall Brawl” was able to be completed.